Are you ready to “field-test” a Tono trailer? Part of the Next Commons Lab Tono initiative, one man single-handedly built a mobile trailer home in the name of regional revitalization.

Next Commons Lab is an interesting project. With teams in 8 rural locations across Japan, each Lab has partnered with their respective local government. By engaging in a variety of projects with the goal of restoring the local economy, they are involved in the greater regional revitalization effort.

The setup is simple yet effective. The local government supports the program by making a special agreement with Next Commons Lab in which the members are given status as special city employees and therefore afforded a basic income. In turn, the members are expected to achieve a certain goal in their individual projects. In every project, the desired end result is a spin-out into a profitable business.

Perhaps the secret sauce of this new effort is the selection of members, an eclectic bunch from diverse backgrounds who are not necessarily locals. While the numbers are still not significant, there are more Japanese who are interested in trying out the countryside lifestyle to get away from the rat race of Japan’s metropolises.

Back to the trailer, this particular project is the fruit of one man’s research mission: to figure out whether a trailer home could be manufactured cheaply enough to be marketed as low-cost housing. In contrast to the western world where mobile homes have been popular for decades, trailer homes are quite novel to Japan.

If you can make it to Tono, a brisk 6-hour train ride or drive from Tokyo, you can see for yourself the black-paneled trailer home prototype. At 6 meters long by 2 meters wide, it shares the same footprint as a Cadillac, but stepping inside is surprisingly spacious.

A city of 27,000 people in a valley surrounded by mountains in Southern central Iwate Prefecture, Tono is a regional center for lumber production. Owing to this, the entire interior of the trailer is covered in attractive uncoated wood. The wood is fragrant, with an aroma like being inside of a whiskey barrel. Adding to the natural aesthetic is the insulation, made from 100% bonafide sheep’s wool. 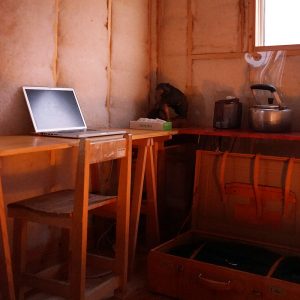 The woolen insulation is a must-have considering the location. In the coldest months, Tono’s temperature can go below -20 degrees Celsius. However, with even a small kerosene stove, the inside temperature quickly rises over 30 degrees. With the heat and the wood aroma, it could pass as a makeshift sauna.

The interior of the trailer is spartan but includes a sleeping area, a writing desk, and a rocking chair. One obvious hurdle to mass production in the current format, there are no WC or bathroom facilities. The prototype borrows those facilities from the house next door. Although a small space, it is quite comfortable. With a total area of 12 square meters, it is not much unlike a small city apartment.

Perhaps the only inconveniences are the lack of in-suite WC, and that currently the only sleeping apparatus is a sleeping bag and pillow. Other than that, the quality of workmanship and the ability of the insulation to maintain temperature even at nighttime does not cease to amaze.

Keeping in mind there are still people living nearby in temporary housing 7 years after the 2011 Tohoku Earthquake and Tsunami Disaster, this is a small project that can help solve a large need. Building a permanent home in Japan is expensive and several structural requirements must be met. Even the most economical of homes cost upwards of 10,000,000 Yen ($90,000 USD) to build. In contrast, a mobile trailer home can be quickly built to a high standard in a factory, transported wherever, and moved around whenever needed.

Feeling trailer envy? The leader of this project says they intend to have a future opportunity to stay in a further-improved version of the trailer as a part of an Airbnb-type program. As for Tono’s first trailer park: we’ll have to see if this one takes off.